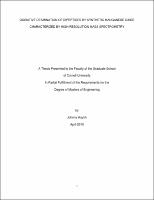 Manganese oxides (MnO2) are ubiquitous in soils and have been implicated in the degradation of organic molecules including peptides, antibiotics, herbicides, and pesticides. In a previous study, glycine-glycine (gly-gly) was reacted with MnO2 to yield Mn (II) and ammonia (NH4+), but the main degradation product was only qualitatively inferred. Using high resolution liquid chromatography-mass spectrometry (LC-MS), we identified and quantified the products formed following batch reactions with birnessite (δ-MnO2) and dipeptides: gly-gly and alanine-glycine (ala-gly). After 24 h, the dipeptide concentration decreased by up to 70% for gly-gly and 40% for ala-gly (additional methyl group at the N-terminus α-carbon). Furthermore, we found that when gly-gly was in the presence of bicarbonate (HCO3-), degradation was impeded to only 10% after 24 h. The degradation products were identified with mass-to-charge ratio (m/z) of 130.049 and 144.065 for gly-gly and ala-gly respectively and are a result of N-terminal oxidative deamination at the α-carbon. These findings may be useful in elucidating the oxidized products of organic toxins with manganese oxides, as well as potentially producing a site specific aldehyde for synthetic chemistry purposes.