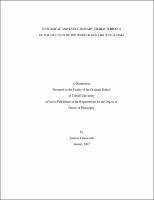 Many songbirds produce simple, species-specific flight-calls. Some fundamental features of flight-calls remain poorly known, including their functions and variability. I reviewed available information on flight-calls and studied: 1) relationships between calling and weather; 2) seasonal flight-call use in warblers; 3) inter- and intraspecific variation in warbler flight-calls; 4) methods for analyzing flight-calls; and 5) relationships between warbler flight-calls and ecological and evolutionary characteristics. I examined relationships among call counts, weather, and bird density. I studied flight-calling in warblers during migratory and non-migratory periods. I recorded flight-calls from captive warblers to evaluate inter- and intraspecific differences and quantify variance among species, individuals, and ages and between sexes. I compared three methods to assign calls to caller using discriminant analysis: 1) spectrographic cross-correlation (SPCC); 2) energy-distribution (ED) measurements; and 3) classification tree analysis (CTA) of ED measurements. I used a multi-locus phylogeny to quantify the extent of phylogenetic signal in flight-call spectrographic characteristics. I employed a quantile regression and null model approach to compare interspecific phylogenetic divergence with corresponding spectrographic differences. I found that: 1) call counts correlated with bird density and weather, but not with weather alone after controlling for density; 2) warblers use flight-calls most extensively during migration, but not exclusively; 3) variation in flight-call properties is greatest among species, with subtle variation among individuals and ages and between sexes; 4) SPCC data yielded the lowest misclassification rates and may best represent individual differences; and 5) in phylogenetically controlled and uncontrolled analyses many energy distribution and syllable structure measurements associated with phylogeny, vegetation density and vegetation height but not with migration strategy, wintering distribution, or morphological characteristics. Flight-calls are probably more functional as species identifiers than as individual identifiers, and such functions may extend beyond migratory periods. Additionally, phylogenetic and ecological effects occur in flight-calls, and evolutionary histories of structural and signal properties may differ. Species recognition may be important in the evolution of syllable structure, whereas adaptation to environment may be important in the evolution of spectral and temporal properties. Incorporating individual-specific information and meteorological data into acoustic monitoring protocols could increase dramatically the power of these methods.