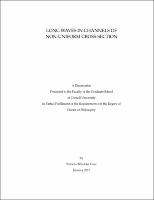 A cross-sectionally averaged one-dimensional long wave model is developed. Three dimensional equations of motions for inviscid and incompressible fluid are first integrated over a channel cross section. To express the resulting one-dimensional equations in terms of the longitudinal component of the crosssectional averaged velocity and span-wise averaged free surface elevation, the characteristic lengths of the channel cross-section in the vertical and transverse directions are assumed to be smaller than the typical wavelength, resulting in the Boussinesq-type equations. The effects of viscous damping are also added in a heuristic manner. The new model is, therefore, adequate for describing weakly-nonlinear and weakly-dispersive waves along a channel of arbitrary non-uniform crosssection. More specifically, the new model has the following new capabilities: i) The arbitrary channel cross-section can be asymmetric with respect to the direction of wave propagation, ii) the channel cross-section can change significantly within a wavelength, iii) the effects of viscosity inside the bottom boundary layer can be considered, and iv) the three dimensional flow features in a crosssection can be recovered from the perturbation solutions. Analytical and numerical examples for uniform channels, channels where the cross-sectional geometry changes slowly and channels where the depth and width variation is appreciable within the wavelength scale are discussed to illustrate the scope of applicability of the present theory. By considering viscous boundary layer effects, the theory agrees well with experimental results for converging and diverging channels (Chang et al., 1979) and with experiments in a uniform channel with a sloping beach (Liu et al., 1979). The results for a solitary wave propagating in a channel in which the width variation is important within the wavelength are discussed. Curvature is introduced by means of orthogonal curvilinear coordinates following the channel. The resulting one-dimensional cross-sectional averaged equations contain new coefficients depending only on the geometry of the channel. To the level of approximation considered, these equations do not capture the free surface tilting due to curvature and show that the wave field is locally affected by the magnitude and sign of the curvature. The theory provides practical model equations for calculating long waves (e.g. tsunamis, tides or flood) propagation in fjord or river, which could have compelling applications in the field of hydraulics and coastal engineering. As an example, for long distance propagation of landslide tsunami in fjords, travel-times and maximum wave heights can be rapidly estimated from one-dimensional governing equations, making the present theory suitable for warning systems.