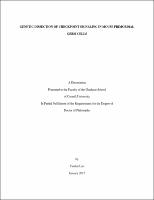 Although mutations are the force of evolution, most mutations are deleterious. Faithful inheritance of genetic information is the key to evolutionary success. The only cell lineage that is capable of transferring genetic information is the germ line. Therefore, refined control of mutation frequency in germ cells is of great importance. The control mechanism mainly involves the DNA damage response (DDR), since DNA damage is the major source of mutations. In mammals, most studies on germ line mutation and DDR focus on meiosis. In contrast, little is known about these processes in primordial germ cells (PGCs). In particular, checkpoint signaling has not been characterized in PGCs. Multiple analysis showed that the mutation rate in germ cells is consistently lower than that in somatic cells. Therefore, it has been proposed that there is a fundamental difference in DDR between germ cells and somatic cells. Indeed, a few DDR mutants have revealed a hypersensitivity of PGCs to DNA damage. In this dissertation, I characterized two such genes in mouse model: FancmC4/C4 and Mcm9XG/XG. Deficiency of either Fancm or Mcm9 causes genome instability as well as PGC depletion. PGC depletion in both mutants is largely due to reduced PGC proliferation between E11.5 and E13.5. In order to understand the correlation between genome instability and reduced PGC proliferation, I conducted genetic studies using 5 checkpoint mutants, including Hus1, Atm, Chk2, p53 and p21. My studies indicated that ATM-p53-p21 signaling is partially responsible for the germ cell deficiency in FancmC4/C4 males. None of the 5 genes is required for the germ cell depletion in FancmC4/C4 females or either sex of Mcm9XG/XG. Additionally, there is an additive germ cell depletion in FancmC4/C4 and Mcm9XG/XG compound mutants, suggesting FancmC4 and Mcm9XG alleles have independent impacts on DDR. Together, my results imply that there are at least 3 checkpoint pathways responsible for DDR in PGCs.