Resettlement Of The Bdul And Its Effect On Preservation Initiatives At Petra, Jordan 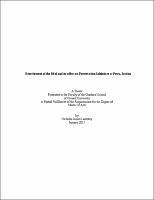 This study examines the resettlement of the Bdul tribe at Jordan's archaeological site of Petra from 1985 through 1987 and considers whether relocation achieves the type of results that heritage professionals and organizations desire. The United States National Park Service Master Plan for the Protection & Use of Petra National Park of 1968 advocated for the Bdul to be relocated for the sake of preservation. The United Nations Educational, Scientific and Cultural Organization (UNESCO), and the World Bank, echoed the USNPS's initial request for relocating the Bdul, and Jordanian governmental organizations carried out the resettlement in 1985, when Petra became a World Heritage Site, as opposed to Jerash Archaeological Park, where the Department of Antiquities did not even attempt relocation. The actual results of the Bdul tribe's relocation to Um Seyhun, a buffer zone of the park, arguably did not change the preservation status of Petra, as tourism, promoted by heritage professionals, is a major threat to the site. The research conducted for this study consisted of twenty-two interviews in Amman and Wadi Musa, Jordan with current and former members of the Jordanian Department of Antiquities and the Ministry of Tourism, Jordanian professors of archaeology and tourism, foreign and Jordanian members of Non-Governmental Organizations involved with past and present projects at Petra, and foreign and Jordanian archaeologists working at Petra.