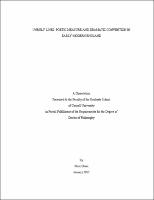 Unruly Lines argues that writers in early modern England use the figure of the line as a tool in developing new modes of representation, and that their written lines are an index for political, aesthetic, and epistemological issues surfacing in the period. Asserting that textual materiality and the technical practices of playing were crucial to the development of literary form, this dissertation proposes that the poetic line and the line of dialogue find literary art reflecting broad early-modern cultural assumptions. By looking beyond literature to discourses as varied as the visual arts, mathematics, architecture, and law, the project offers a variety of different ways to see the written line anew. Examining moments wherein lines introduce ways of meaning distinct from verbal semantics, this project claims that early modern writers began perceiving in the written line a means to challenge and disrupt habituated strategies for apprehension. Evenly divided into sections on poetry and drama, this project proposes that the inventiveness and self-reflexivity for which the early modern period's literature is known stem from the line's ability to challenge ordered systems of representation-to contest the presumed "rules" of art. The first two chapters, which consider poetry by King James, John Donne, and William Shakespeare, argue that the shape and structure of verse lines mark poetry as a specialized mode of discourse capable of figuring forth ideas unattainable in other media. Visually ragged, uneven, or blatantly artful and ornamental lines, I argue, start to diagrammatically supplement and juxtapose vivid verbal images. The second half of the project then considers how players use lines of dialogue, and focuses on works by John Lyly, George Peele, and Shakespeare. These chapters explain how lines drawn into individual actors' parts (indicating their cues) function as technical devices for building-and breaking up and challenging-the limits of theatrical space. As each chapter demonstrates, poets and playwrights take advantage of the verbal line's inability to offer only semantic meaning by cultivating self-consciously disruptive and unruly representations. These texts take into account the experiences of readers and audiences, and strive to actively build, rather than simply report, knowledge.