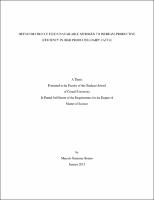 The high cost of protein feeds and the growing concern for the environment has motivated dairy producers and nutritionists to focus their attention on increasing nitrogen (N) use efficiency in dairy farms. It is well recognized that reducing N content of cattle diets is the single most important factor to increase the efficiency of N use. However, to effectively feed lower protein diets requires the nutritionist to know the availability of N in feeds in order to not negatively affect milk production. Nutrition models are an essential tool to allow feeding lower protein diets. However, these models require precise characterization of N in feeds. A new assay was developed that predicts N indigestibility (unavailable N, uN) in non-forage feeds using an in vitro approach. This approach is known as the in vitro N indigestibility assay (IVNIDA). The predictions of this assay have not been prospectively evaluated in lactating dairy cattle as a primary experimental objective. The objective of this study was to evaluate in high producing dairy cattle, both the outcome of the IVNIDA and the ability to utilize the prediction of the uN assay in the Cornell Net Carbohydrate and Protein System (CNCPS) to predict cattle performance. To evaluate the uN assay predictions, a replicated pen study was conducted to assess the effect of balancing diets for uN on the performance of high producing dairy cattle. One hundred and twenty-eight cattle that were greater than 60 days in milk (DIM) at the beginning of the experiment were distributed into 8 pens of 16 cows and pens were randomly allocated to the two dietary treatments. Cattle were fed one of two iso-nitrogenous, iso-caloric and iso-NDF treatment diets where the only difference was from the inclusion of two different blood meals (BM) used in each diet. The uN content of the two BM was 9% and 34% as predicted by the assay, whereas with acid detergent insoluble nitrogen, no difference in indigestibility was expected. The inclusion of the BM was done on an iso-nitrogenous basis and the formulated predicted difference in uN was 39 g/d or 5.8% of actual N intake, thus that represented the difference in available N between the two treatments. There was no effect of uN on dry matter intake (DMI) or N intake and averaged 27.3 kg/d and 668 g/d for both treatments, respectively. However, milk yield and energy corrected milk (ECM) were 1.6 and 1.9 kg/d higher for the cows fed the LOW uN diet (P < 0.01). Higher uN was also associated with lower milk protein yield (P < 0.03), lower milk fat yield (P < 0.01) and lower milk urea nitrogen (P < 0.01). The result of the experiment indicated that IVNIDA predictions were consistent with cattle responses. An evaluation using the uN values in place of ADIN in the structure of the CNCPS demonstrated that MP allowable milk using the uN values from the uN assay increased the accuracy of the prediction and enabled the model to predict the first limiting nutrient when MP was first limiting. An economic analysis of digestibility indicated that even under the worst case scenario of high market price for blood meal and low milk price, utilizing a more digestible blood was associated with a beneficial economic impact for the dairy farm. ii