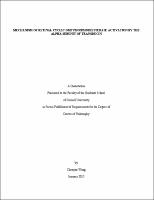 The heterotrimeric G protein, transducin, and its cognate effector, cyclic GMP (cGMP) phosphodiesterase (PDE) 6 in the vertebrate rod photoreceptors play a pivotal role in visual signal transduction. Rhodopsin, upon activation by light, catalyzes the exchange of GTP for the bound GDP on the [alpha]-subunit of the heterotrimeric G-protein, transducin. Upon GTP binding, transducin dissociates into the GTP-bound alpha subunit ([alpha]T-GTP) and the accessory beta-gamma complex ([beta][gamma]). [alpha]T-GTP activates PDE by removing the inhibition of its catalytic activity by its regulatory gamma subunit (PDE[gamma]). The activated PDE is able to hydrolyze cGMP, a second messenger that is essential for regulating transmembrane ion channels. Due to the hydrolysis of cGMP, an ionic gradient is generated across the cell membrane that enables the photoreceptor to transduce visual signals to the secondary visual nervous cells. Although the photo-transduction signaling pathway has been studied for a few decades, the structural basis by which [alpha]T- GTP stimulates its effector, the PDE, still remains unclear. To investigate the molecular basis of PDE activation by [alpha]T-GTP, we generated a number of point mutants of chimeric [alpha]T and characterized them based on their ability to stimulate PDE. Using techniques that include environmentally-sensitive fluorescence emission and fluorescence polarization from extrinsic probes, we examined the binding affinity of each [alpha]T mutant for PDE, and identified the [alpha]G/[alpha]4 loop as a previously unappreciated region in [alpha]T that is required for full stimulation of PDE activity.     We then examined the Switch regions in [alpha]T in detail to determine if they impact PDE function. GTP binding to the [alpha] subunit of heterotrimeric G protein (G[alpha]) results in a conformational change in three regions of G[alpha], designated Switch I, II, and III, respectively. In G[alpha]-GTP, an ionic interaction network that consists of five conserved residues establishes a link between Switch II and III. Mutating a conserved glutamate residue (E241) in this network to alanine yields a dominant-negative [alpha]T mutant, which is capable of binding to PDE but unable to stimulate it. This finding suggests that the [alpha]3 helix, where the glutamate residue is located, is likely to be an important structural element that translates effector binding to effector activation. With the previous discoveries from our lab and other research groups, the results of this study identifies a potential PDE-interacting surface on [alpha]T, which is comprised of the [alpha]3 helix, the [alpha]3/[beta]5 loop, Switch II, Switch III, the [alpha]G/[alpha]4 loop, the [alpha]4 helix and the [alpha]4/[beta]6 loop.