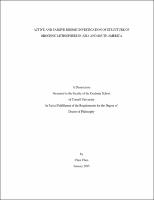 Asia and South America possess the two iconic orogenic belts - Himalayas and Andes and two largest and highest plateaus - Tibetan Plateau and Puna Plateau on the earth. Their lithospheres were formed under continental-continental collision and ocean-continent subduction regimes respectively. Seismic images of their current lithospheric structure provide key insights into the current stage in their evolutionary process. Lithospheric structure beneath the Tibetan Plateau has been studied using deep seismic reflection profiling since the beginning of the INDEPTH project in 1992. This international effort led by consortium of Chinese and western academic institutions, continued over 25 years in four different phases. Key features spanned by this megatransect include the Main Himalaya Thrust (MHT) at the southern margin of the plateau, crustal seismic bright spots in the south and central part of the plateau, Moho topography across the plateau and especially an abrupt step in the Moho beneath the northeastern margin of the Plateau beneath the Qaidam Basin. A recent reflection profile by the SINOPROBE Project across the Sichuan Basin located at the southeast edge of the Tibetan Plateau, reveals sub-crustal dipping reflectors which are very likely to result from Neo-Proterozoic subduction beneath the Sichuan Basin. The preservation of these features supports the interpretation that the Sichuan Basin represents at buttress against eastward deformation and crustal thickening of the Tibetan Plateau. Lithospheric structure beneath the Andean orogenic belt is here 1 studied with a novel seismic reflection technique, one which uses earthquakes below 100 km depth as sources to illuminate the overlying lithospheric structure. The application of this technique is based upon exploitation of USArray, a large scale, high density passive seismic array that has been moving across the continental US since 2003. Analysis of 124 earthquakes that occurred between 2003 to 2012 provides a) new estimates of crustal thickness in areas previously imaged by conventional techniques; b) the first estimates of Moho depth in areas inaccessible to conventional geophysical surveys, c) mapped regions with nonreflective Mohos and d) identified prominent crustal seismic reflectors that may mark magma chambers, large scale decollements, or intracrustal phase changes in various parts of the Andean system. Each of these new observations constitute significant new constraints for geodynamic models of the Andean tectonics. 2