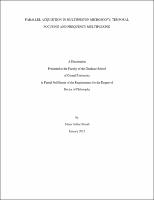 Multiphoton microscopy is a powerful platform for both biological study and medical imaging. Techniques developed on this platform have achieved unparalleled resolution and chemical specificity, imaging at depths unreachable by traditional forms of optical microscopy. This thesis details several techniques meant to improve multiphoton depth penetration, imaging speed, and medical applicability. One such technique uses a modified form of simultaneous spatial and temporal focusing (SSTF) to achieve enhanced axial confinement. In SSTF a diffraction grating is imaged onto the sample, and the separation and recombination of the excitation spectral components form a temporal focus. By blocking the central portion of the excitation spectrum, an effective two-color two-photon imaging system is formed. By detecting only the resulting sum frequency generation signal the axial confinement becomes significantly tighter than that achieved by conventional two-photon microscopy. The temporal focus of SSTF may be axially scanned by modulating the group delay dispersion (GDD) of the excitation pulse. In a proof-of-concept experiment, a piezo-bimorph mirror is used to rapidly modulate GDD in a temporal focusing setup. Axial scans over 60 [mu]m of mouse skin are performed at speeds up to 200Hz. This is done through an optical fiber and with no moving parts or electrical components at the distal end, paving the way for the development of a minimally invasive, axial scanning endoscope. Another technique uses frequency multiplexing to perform parallel acquisition of image data using a single-element detector. Five hundred pixels in a line are individually intensity modulated at different radio frequencies. A Fourier transform of the signal unscrambles the image data after detection. In scattering regimes where conventional parallel acquisition (i.e. charge coupled device array, or CCD) methods are impossible, this multifocal multiphoton modulation microscopy (M4) technique allows for higher signal-to-noise ratios and faster imaging. Fluorescent/phosphorescent lifetime can be calculated from the phase component of the Fourier transform in the M4 technique. In combination with the inherent speed advantages of M4, this is used to take full-frame phosphorescent lifetime images of oxygen-sensing dye in vivo in mouse brain vasculature at record speed. ii