Emergence and definitions of digital libraries 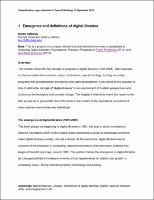 This chapter of Exploring Digital Libraries traces the first decade of progress in digital libraries (1991-2001), with emphasis on the foundational innovations, vision, motivations, new technology, funding and early programs that prompted their emergence and rapid development. It next turns to the question of how to define the concept of “digital libraries” in an environment of multiple perspectives and continuous technological and societal change. The chapter’s intent is to orient the reader to the field as well as to ground the rest of the book in the context of the aspirations and efforts of many diverse communities and individuals.

This is a preprint of a chapter whose final and definitive form was co-published in Exploring Digital Libraries: Foundations, Practice, Prospects by Facet Publishing (2014) and ALA Neal-Schuman (2014).