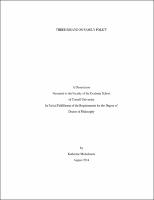 [This dissertation examines issues in family demography and the role of public policy in shaping life course transitions including educational attainment, marriage, and family formation. The first two chapters focus on the Earned Income Tax Credit, one of the largest cash transfer programs in the United States. Chapter one analyzes the impact of the EITC on the educational attainment of youth from low socioeconomic status families. Variation in state EITC policies is used to analyze the impact of increased household income on children's educational attainment. Results suggest that a $1,000 increase in state EITC generosity increases college enrollment among 18-23 year olds by 1 percentage point and increases college enrollment by 0.3 of a percentage point, a 10% increase in college completion among this group. Chapter two analyzes the marriage penalties associated with the EITC. First, I simulate a marriage market to predict the earnings of potential spouses and how a spouse's earnings impact EITC benefits. Multinomial regression models are then used to assess how an expected loss in EITC benefits upon marriage affects one's likelihood of marrying or cohabiting. Results suggest that approximately 65% of EITC recipients can expect to lose some of their EITC benefits upon marriage. The average EITC recipient can expect to lose approximately half of her EITC benefit, or about $1,050. A $1,000 expected loss in EITC benefits upon marriage is associated with a 1.8 percentage point decline in the likelihood of marrying, and a 1.1 percentage point increase in the likelihood of cohabiting. Chapter three (co-authored with Kelly Musick) examines variation in family formation among college graduates. We explore differences in the rates of childlessness among college-educated women across academic disciplines and examine potential mechanisms that may account for such differences. We find that women who major in health-related fields have the lowest levels of childlessness at around 16% by age 44, while women who major in the arts and humanities have the highest rates of childlessness, at 25%. We find that these differences are correlated with differences in early marriage patterns among women in these fields, as well as traditional gender role attitudes.]