Translative Carnivalism: Performance And Language In The Caribbean Text 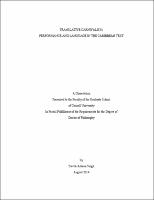 This dissertation identifies two dominant modes of postcolonial Caribbean expression: performance and multilingualism. I propose that a relational logic underlies the region's literature and popular culture, where the persistence of coloniality coincides with the new practice of autonomy, whether purely cultural autonomy or also political. Performance layers the desires and impulses for self-expression and self-determination upon the continuing impositions and complicities of the (neo)colonial order, while multilingualism translatively enacts a similar negotiation between standardized European languages and local Creoles, metropolitan or global standards and Caribbean cognitive and expressive logics. Within this doubling of selves and of ways of being, acting, and creating, exhibition, understood through Carnival masquerade, makes a specifically Caribbean exceptionality conspicuous. Drawing on translation theorist Naoki Sakai's concept of the "heterolingual address," departing from Homi Bhabha's now classic postcolonial theory of "hybridity," and revising Antonio Benitez-Rojo's post-modern understanding of Caribbean performance, I present distinct moments and sites of postcolonial Caribbean expression where the mode and framework for both political action and creative expression emerge as translative performance, and achieve, in the process, an exhibitive visibility of the national or local. In the chapter on Derek Walcott's Drums and Colours, I use Arendtian "action" to describe this speaking and acting before others in the moment of independence, a multilingual experiment in community against a vulnerable plurality. In Monchoachi's post-départementalisation exhibition of Creole philosophical value through vehicular French, the postcolonial logic of alienation serves to initiate "freedom" and "ecstasy," the "looseness" of excess produced in the relation between "word" and "body." Maryse Condé's autobiographical performance of an untraditional self that does not speak Creole overtly troubles categories of "truth" in order to expose how marginalities are engendered in a valorization of créolité as the only authentic writing. Finally, an exploration of Carnival texts and archives, both in the present and in previous centuries, demonstrates how the new Trinbagonian nation-state struggles to reconcile liberal political ideals and contradictory local practices-a duality that recalls Peter Wilson's "crab antics," between reputation and respectability.