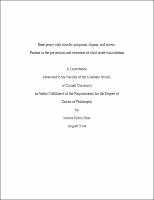 Acute malnutrition puts over 50 million children at high risk of morbidity and mortality each year. Although treatment programs are efficacious, they neglect to address the condition's nondietary causes and program coverage rates are estimated to be below 15%. Interest in multisectoral approaches for the prevention and treatment of acute malnutrition has grown rapidly over the last decade; rigorous evidence regarding the impact of such approaches is lacking. The objectives of this dissertation were to (1) examine the role of emergency cash transfer programs (CTPs) in the prevention of acute malnutrition, and (2) to determine whether stigma associated with acute malnutrition limits access to treatment programs. We used a longitudinal dataset from a cohort of 453 children and households targeted by an unconditional emergency CTP in Maradi, Niger, to identify factors associated with the risk of developing acute malnutrition during a food crisis in 2012. We then used data from a quasiexperimental study of a conditional emergency CTP in Tahoua, Niger, to evaluate its impact on child diet and weight gain during the same period, comparing 212 beneficiary children to 212 concurrent controls. Finally, we conducted a cross-sectional survey of 711 caregivers attending health facilities in Marsabit County, Kenya, to assess barriers to accessing treatment for children with acute malnutrition. In Niger, our longitudinal study indicated that health and wealth-related factors were significant determinants of acute malnutrition risk. Diet-related factors and food expenditures were not associated with risk. Our quasi-experimental study revealed remarkable improvements in the diet and weight gain of beneficiary CTP children relative to controls. In Kenya, caregivers of acutely malnourished children were significantly more likely than others to report shame as a barrier to accessing treatment. We conclude that emergency CTPs have great potential to prevent acute malnutrition in contexts similar to the 2012 food crisis in Niger, although their ability to influence the health environment or to compensate for chronic poverty appears limited. Access to treatment for acute malnutrition is likely constrained by stigma in addition to a number of other well-established access barriers. There is a need for further critical evaluation of emergency CTPs as well as mechanisms to identify and reduce the sources of acute malnutrition-related stigma.     iv