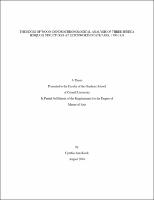 Letchworth State Park in Castile, New York, maintains three log structures originally built in Seneca communities along the Genesee River Valley in the late 18th and early 19th centuries: the Caneadea Council House, the Nancy Jemison cabin, and the "Buffalo Tom" Jemison cabin. Dendrochronology (tree-ring dating) provided more precise construction dates for the council house and cabins. This technique indicated a date for the council house's construction of ca. 1820, with a modification episode ca. 1831, rather than in the range of 1759 to 1780 derived from historic documents. Dendrochronological analysis supports the historic dates for the construction of the Nancy Jemison cabin around 1800 and the "Buffalo Tom" Jemison cabin ca. 1818. These dates, along with consideration of how the Letchworth structures compare to K. Jordan's (2008) intercultural/ creolized and Brown's (2000) Reservation Log House types, aid in examining the council house and cabins in relation to events leading up to and following the Revolutionary War, reservationization, and Seneca decisions to incorporate elements of European-style log construction. Senecas could have drawn on construction methods learned from Moravian missionaries, mixed native communities, and settlers building in Midland forms. The desire to erect more long-lasting buildings in more confined territory, in addition to increased European American settlement and infrastructure-building following the sale of Seneca lands in western New York, impacted Seneca decisions to adopt and employ such techniques as they saw fit.