Development Of A Viscoelastic Cellular Model To Estimate Forces At The Cellular Length Scale. 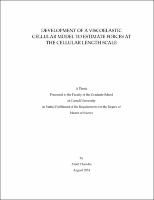 Computational tools were developed to estimate extracellular and subcellular forces in a single cell (or a small population of cells) when it is subjected to external forces such as due to blast waves traversing through tissue and the subsequent formation and rupture of cavitation bubbles. To this effect the ability to capture the shape (or geometry) of cells and nuclei of regularshaped cells (e.g. HL60 cells) and irregular-shaped cells (e.g. astrocytes) from images was developed. The resulting geometries of the cytoplasm and the nucleus were meshed with different meshing characteristics which were used to create a viscoelastic model of a cell. To create the viscoelastic model, the edges connecting the mesh point were replaced with Voigt elements. An open source software package was developed, which automatically generates a system of coupled ODEs with inequality constraints describing the kinematic response of the viscoelastic model to an external force. A Viscoelastic model of an HL60 cell embedded in an extracellular matrix was developed. The model had 1871 nodes which resulted in a system of 7484 coupled ODEs with inequality constraints. Forces in any part of the model could be estimated as a result of perturbations. A viscoelastic model for an astrocyte was also developed. In order to create an accurate viscoelastic model of a cell, the Voigt parameters need to be estimated from experimental data. An optimization procedure was created to develop the ability to estimate parameters from experimental data. These computational tools will aid in future studies to correlate forces at the cellular length scale with cellular signaling data to develop a mechanically coupled signal transduction network for secondary injury following mild traumatic brain injury.