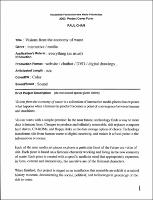 Visions from the economy of waste is a collection of interactive media pieces that explores what happens when a human by-product becomes a point of convergence between humans and machines. Visions starts with a simple premise: In the near future, technology finds a way to store data in human feces. Cheaper to produce and infinitely renewable, shit replaces computer hard drives, CD-ROMs, and floppy disks as the data storage option of choice. Technology transforms shit from human waste to digital necessity, and makes it a focal point in the information economy. Each of the nine media art pieces explores a particular facet of the future use value of shit. Each piece is based on a fictional character working and living in the new economy of waste. Each piece is created with a specific media in mind that appropriately expresses, in form, content and interactivity, the narrative arc of the fictional characters. When finished, this project is staged as an installation that resemble an exhibit at a natural history museum, documenting the social, political, and technological genealogy of the shit to come.