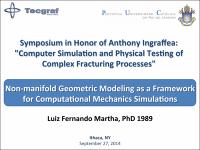 Geometric modeling is an area of computer graphics that deals with creation, manipulation, maintenance, and analysis of representations of geometric forms of two and three-dimensional objects. It is applied in several fields, such as movie production, design of industrial mechanical parts, scientific visualization, and reproduction of objects for analysis in engineering. Historically, geometric modeling has evolved from wireframe modeling to surface modeling, solid modeling, and non-manifold modeling. Non-manifold geometric modeling allows the representation of multiregion objects, of internal or dangling structures, and of lower dimensions degenerated parts. Many application areas of geometric modeling take advantage of the additional features of non-manifold representation. In computational mechanics, for example, it is common the analysis of idealized structures such as shells combined with solids and beams. Another application is the representation of heterogeneous objects with regions with common volumes, coincident faces, internal structures, and solids consisting of different materials. This lecture illustrates the use of topological data structures for non-manifold representations as a framework for numerical simulations in computational mechanics. The main focus here is on the development of strategies for mesh generation for modeling heterogeneous objects such as subsurface geological models.