Isolation of Bacteria from Compost for Potential Use in Biodecaffeination 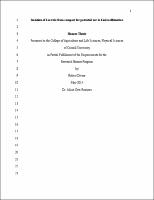 Caffeine (1,3,7-trimethyl xanthine) is a bioactive compound present in common foods and beverages such as coffee, tea, and chocolate. Though many consumers value caffeine for its physiological effects, others may prefer decaffeinated products to avoid caffeine. Decaffeination technologies have a great economic and environmental impact; however, current methods have various disadvantages, such as cost, waste, and solvent use. Microbial methods, known as biodecaffeination, have been explored as alternatives. Various microbes that are able to metabolize caffeine have been isolated from coffee plant roots. To this point, compost has not been looked at as a potential source for decaffeinating microbes. Our objective was to isolate and identify microorganisms from compost and to address their potential as biodecaffeinators. Compost samples were obtained and then grown in nutrient broth. Cultures were streaked onto a selective agar that contained caffeine as its only carbon source. Partial 16S rDNA sequences were obtained for a subset of the colonies isolated from the caffeine agar. Preliminary results suggested that the isolated strains were Pseudomonas, Arthrobacter, Sphingobacterium, Streptomyces, and Paenibacillus, and that they may be capable of metabolizing caffeine.