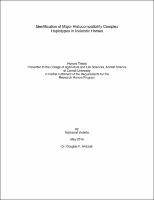 The Major Histocompatibility Complex (MHC) is a region of the vertebrate genome that encodes many immune-related proteins. The most well-known proteins that are encoded in this region are the MHC class I and MHC class II cell surface proteins. These proteins are integral in producing the adaptive immune response. Using polymorphic microsatellites within the MHC, MHC haplotypes were characterized from an extended Icelandic horse family of half and full siblings. The herd is composed of one stallion, fifteen dams, and three sets of foals from each dam. A total of nine microsatellite loci were tested: two in the MHC class I region, two in the MHC class III region, and five in the MHC class II region. The Icelandic herd displayed a large degree of diversity in this region even though the population has been isolated and affected by bottleneck events in the past. From the 32 possible unique haplotypes belonging to the one founder stallion and 15 mares, 26 unique haplotypes were identified. A MHC recombination event occurred on one of the paternal chromosomes. The stallion also exhibited segregation distortion in the distribution of the stallion’s MHC haplotypes inherited by the foals but not the sex ratio of the offspring. These findings suggest that the Icelandic horse population has a greater degree of diversity in the MHC region than most other commonly studied horse breeds. This diversity may come from a recombination mechanism that produces unique haplotypes by crossing over of existing haplotypes in the population at a higher rate than found in larger populations. Another possible explanation would be that less favorable MHC haplotypes are allowed to persist in the less immunologically selective environment of Iceland.