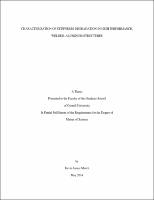 The stiffness of a structure is controlled by the materials that make up the structure and the geometry in which the members are configured, if either of these change over the life of a structure the stiffness will change. Changes in the geometry of a structure are often easily detected through routine maintenance operations. But what is happening in the material is often not as easy to detect. There are many different ways in which a material will degrade over the life of a structure. Rust is an easy example to illustrate this. As the steel member of bridge rusts it loses mass and is less able to sustain load. Often rust is mitigated through coatings, such as paint, and often other materials are used. Aluminum is a great substitute for steel because it has comparable strength and is a ductal material, and although it corrodes in other ways, it does not rust as steel rusts and it is lighter than steel. Many different industries use aluminum for various applications. The Navy uses aluminum to create faster and more fuel efficient ships. But these ships are huge complex structures and are often difficult to model and impractical to experiment on. To avoid these prohibitions an analogous high performance, welded, aluminum structure is used to characterize stiffness degradation. In this thesis a welded aluminum bike frame is used as that substitute structure. An experiment is developed, designed, constructed, and executed on a purchased aluminum bike frame. This experiment found that stiffness degradation does appear to occur in the bike frame. Over 1.2 million, displacement controlled, loading cycles the stiffness appears to degrade. Obtaining 90% confidence intervals for the stiffness degradation, a lower bound of 0.0662% and an upper bound of 0.6414% were obtained. A 90% confidence interval on correlation is also obtained, which describes the confidence of stiffness depending on the number of cycles. A material model is developed to reproduce published experimental data that was obtained using an aluminum notched beam in a 3-point bend test subjected to cyclic displacement controlled loading. This data shows stiffness degradation of 17.7% over 140,000 loading cycles. While developing a finite element model of the notched beam it was observed that the cycling of the notched beam appears to be occurring in the elastic regime. As a result, the material model is based on accumulated elastic strain. A damage multiplier is applied to the accumulated strain and a value for this multiplier is found that matches the experimental data. The aluminum bike frame used in the experiment was then measured and modeled using finite elements. The material model developed using the notched beam experiment is applied to this finite element model. The results of the bike frame experiment were then examined using this finite element model. The multiplier needed to match the experimental result is 5000 times smaller than the expected multiplier. The experimental evidence obtained from the bike frame can conclude that stiffness degradation does occur in high performance, welded, aluminum structures. The actual and expected multiplier values are vastly different concluding that the developed material model lacks predictive accuracy.