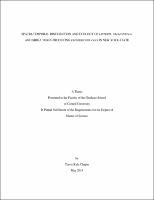 Agricultural lands are often interspersed with areas of natural land cover (e.g., forests, wetlands) that may serve as environmental reservoirs of pathogens. However, the potential for natural areas to serve as reservoirs of food-associated pathogens is poorly understood. As well, Listeria species have been isolated from diverse environments, often at considerable prevalence, and are known to persist in food processing facilities. The presence of Listeria spp. has been suggested to be an indicator of L. monocytogenes contamination. In the studies presented here, we investigated the distribution of Listeria monocytogenes, Listeria spp., Salmonella, and Shiga toxin-producing Escherichia coli (STEC) in five study sites representing natural environments across New York State (NYS). Data from an additional study was also used to compare the prevalence and diversity of Listeria spp. between produce production and natural environments. Geographical and meteorological factors that affect the prevalence of L. monocytogenes and Listeria spp. in these environments were also explored. We found that (i) L. monocytogenes is found at considerably higher prevalence than Salmonella and STEC in natural areas of NYS, (ii) the prevalence of L. monocytogenes shows considerable variation associated with season, geospatial, and meteorological factors, and (iii) the effects of proximity to water and pasture lands on L. monocytogenes prevalence differ between locations. Differences in baseline values of L. monocytogenes prevalence among the five study sites suggested that different sets of ecosystem dynamics influence the presence of L. monocytogenes in different study sites. We also found that the prevalence of Listeria spp. was approximately 34% and 33% for samples obtained from produce production (201/588) and natural environments (245/734), respectively. The co-isolation of L. monocytogenes and at least one other species of Listeria from a sample was 9% in produce production environments, compared to 3% in natural environments. Soil moisture and proximity to water and pastures were identified as important factors for detection of Listeria spp. in produce production environments, while elevation, study site and proximity to pastures were identified as important predictors for detection of Listeria spp. in natural environments, as determined by randomForest models. Our data show (i) that Listeria spp. were prevalent in both agricultural and non-agricultural environments and (ii) that geographical and meteorological factors associated with Listeria spp. detection were considerably different between the two environments. Educational modules were also developed, inspired in part by the research presented here. Career and educational opportunities in food science and food safety are under-recognized by K12 students and educators. Additionally, misperceptions regarding nature of science understanding continue to persist in K-12 students. In an effort to increase awareness concerning career and educational opportunities in food science and food safety and to improve nature of science understanding among K-12 students, a series of problem-based learning modules was developed and pilot tested with a total of 61 K-12 students. Evaluations and assessments indicated that (i) interest in science and food safety increased and (ii) content knowledge related to the nature of science, food science, and food safety was improved. We further suggest that these modules provide opportunities for educators in traditional as well as extracurricular settings to demonstrate important concepts contained in the newly released Next Generation Science Standards. ii