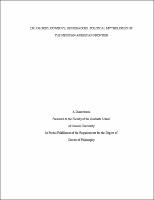 Cowboys, drug lords and desperadoes, with their unholstered guns, riding horses or trucks, roaming through the wide desert, represent key parts of the political mythology of the Mexican and American frontiers. This is a territory that, even as it has always been considered peripheral, has had a central role in shaping the central identities of both countries, as well as in the development of their attitudes towards violence and conflict, legality and illegality. My research focuses on these three figures and the territory in which they roam, eliciting from narratives that center around them theories of political exceptionality, legitimation, and substantiality. On the frontier regions of the liberal, representative state, its shortcomings become more obvious, and betray the blind spots of our political schema. I argue in my dissertation that the manifestations of violence that surround this territory do not arise in spite of the state and its notions of legality, but because of the law and the processes through which it comes into existence. To illustrate this point, I construct a narrative divided in three chapters, which develops the imaginary of each figure, focusing on the work of Cormac McCarthy, Clint Eastwood, Luis G. Inclán, Yuri Herrera, Américo Paredes and Rolando Hinojosa. In my dissertation, I show the pathways through which these works represent the way the law becomes intertwined with the outlaw, affirming and negating itself through its exercise. Each chapter focuses on one of three of the main cultural identity groups that populate the region, Anglos, Chicanos and Mexicans, while analyzing the tenets of one of the branches of government. In this way, I want to call attention to how stories occupy political discourse and showcase the failings of our political systems. By virtue of being outside of the "civilized" centers of the Nation State, farther from the cosmetic institutions that hide inequality and injustice, the frontier helps us perceive the underbelly of representative democracy, revealing the nightmarish counterparts of the State's generals, politicians and tycoons in the roaming cowboy gunslingers, powerful drug lords and landless desperadoes of the North American desert.