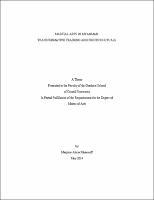 Myanmar martial arts, specifically the let-whay style, or Myanmar traditional boxing, are practiced by multiple ethnic groups, as well as among the Burman majority, and they offer almost an entirely unstudied field of inquiry. With a history of the Myanmar government continuing the British categorical system of ethnic groups and contributing to ethnic minority separatism how do the martial arts play a part in community development, and subsequently, identity formation? Let-whay is popular among students, military personnel, and professional fighters in the city of Yangon. The question arises whether the presence of a let-whay center plays a positive, cohesive role in Yangon local society, or what its role is. My thesis is that martial arts centers promote a community environment among its students despite the presence of differing ethnic groups. I propose that through the "power of movement", practitioners and trainees feel a sense of "community", regardless of age, nationality, ethnicity or gender. I shape my interpretations through the lens of Arnold van Gennep's theory of "liminality". In my thesis, I attempt to build a new interpretation of "liminal" experiences. Perhaps these "liminal" experiences are not disappearing in an era of increasing industrial nations and instead are alive and functioning in Myanmar in the context of the martial arts in a country caught in its own ongoing political, social, and economic transitions. First I describe a shared martial arts historical narrative as a liminal "commonality" for the participants. Secondly, I determine that let-whay practitioners from Yangon local society, a modern city, and foreigners from industrial nations embody a sense of community by experiencing shared phases of liminality. Furthermore, I suggest that despite "liminoid" characteristics, practicing the martial arts in Yangon is not necessarily by "choice," the leading factor determining what is "play" versus "work." I argue that the practitioners experience "liminal rites of passage" therefore they embody lived martial arts. I conducted ethnographic fieldwork in Yangon, Myanmar using methods that included participant observation, formal interviews, informal conversations, and questionnaires in a fiveweek period over the winter break of the academic year 2013 - 14, and also by email during three week after my return to Cornell University. I observed three separate martial arts centers in and around Yangon City, Myanmar. However, most of the data collected for this paper comes from only two of these centers - the Thut Ti Let-Whay Myanmar Boxing Club (Thut Ti) and the Ko Kyaw Soe's Let-whay gym. I conclude that a sense of community exists at the Thut Ti center despite the presence of novice, amateur, and professional fighters, of various ethnic and national groups and religion, of both genders. Since foreign fighters can embody similar liminal experiences that national fighters endure, they too participate as a member of the Myanmar boxing club. ii