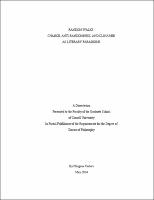 This dissertation challenges the critical accounts that have confined the aesthetic fertility of randomness to early twentieth-century literature, and notably to Mallarmé and the Surrealists. I supplement this truncated genealogy and argue that the narratives from the 1960s onward allow for a significantly novel articulation of chance and writing. A paradox encapsulates the creative contradiction at work: randomness can productively be framed and analyzed in constrained prose. I therefore track its emplotment in the novels by proponents of 'Pataphysics and the Oulipo. Writers such as Jarry and Perec borrow the materialist concept of the clinamen in order to rekindle the association between letters and atoms, and disrupt the traditional understanding of creation as inspiration. My critical contribution is to turn the materialist clinamen into a literary paradigm, and to flag it as the symptom of a broader, decisive transformation in contemporary fiction beyond oulipian procedures and modernist strategies. The clinamen holds in tension poetics as a set of rules and aesthetics as the ultimate singularity of an authorial intent. My dissertation situates this pivotal tension between chance and necessity within a broader genealogy: I deploy my hypothesis from Balzac, Proust, and Breton to Beckett, Queneau, and Modiano. My critical observations not only touch on aesthetics, but also epistemological questions. I disentangle the paradoxes involved in the conceptualization of randomness to propose a delineation of its conflictual articulation with determinism and intentionality. My rereading strategically uses a parameter of randomness that has been underexplored in science, philosophy, and literature: space. The spatialization of randomness is a crucial component of its genealogy, and it brings to light the complex moves involved in its integration in literature. My take on the legacy of randomness focuses on a specific device: the clinamen, a term from ancient physics that indicates the aleatory moment and place where atoms swerve from their fated fall. I trace the exemplary surfacing of the clinamen in philosophy, starting with Democritus, Epicurus, and Lucretius; I map its disruptive actualization in theory from Bergson to Meillassoux, through Althusser, Lacan, Derrida, Deleuze, Serres, and Nancy.