Innovation Without Change Or Extinction: An Institutional Analysis Of The Persistence Of Alternative Schools 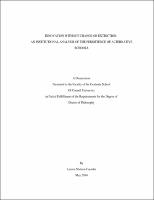