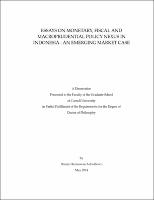 credit/GDP to avoid the buildup of excessive risks, macro prudential policies become quantitatively more important. The second chapter based on premise that monetary policy has played a prominent stabilization role in many countries during the global financial crises, but fiscal policy has been seen as either sub-optimal or less effective. There has been renewed interest in fiscal policy in small open economies such as the UK and European periphery where austerity took place amidst low inflation and accompanied by internal or external imbalances. In an emerging economy, a larger expected share of nonRicardian agents and extent of real and nominal rigidities would be expected to create a larger potential role for fiscal policy in macro-economic stabilization and strengthening the resilience of the economy. Since we focused on monetary and fiscal policy only, there is no financial friction here but instead we developed a small open economy model. The model is estimated for the Indonesian economy, using a Bayesian approach to explore the role of fiscal policy in the existence of nonRicardian households. The model also features sticky prices and wages, nonRicardian agents and tax distortions to explore (i) the potential role for fiscal policy in stabilization, and (ii) monetary policy and fiscal policy interaction more generally. We found that fiscal policy does contribute to macroeconomic stabilization in Indonesia with its countercyclical policy in terms of fiscal expenditure and a tax response to debt that ensures solvency. However, fiscal policy should thanks to a large estimated share of nonRicardians households because they create an important role for fiscal policy, while price and wage rigidities and distortionary taxes are not. The fiscal debt also plays an important shock absorber role, allowing active fiscal stabilization and absorption of exchange rate valuation effects on the stocks of debt and reserves. In the third chapter, we assessed the problem of large and persistent global imbalances in the recent years that have changed the behavior of capital flows across countries, particularly in the emerging market. After the global financial crisis in the late 2000s, the emerging market has experienced massive capital inflows due to the strong countercyclical policy in the advanced economy. These inflows lead to excessive credit growth and booms in asset prices in the emerging market, including Indonesia. In general, this massive global financial cycle has amplified the business cycle and one of the option to deal with the so-called enhanced trillema is focus on the excessive leverage and credit growth as well as some forms of capital control such as tax on non-core liabilities. Therefore, in this chapter, we combine the model from the first and second chapters, mainly the macro prudential policy and non Ricardian households issue, and develop a New-Keynesian DSGE model for a small open economy, and estimate it for the Indonesian economy. The parameter estimation process uses Bayesian approach to explore the role of macro prudential policy and tax in non-core liabilities as one form of the capital control policy. Therefore, with those policy options, this research explores the potential role of each policy to mitigate the massive amplification of the domestic business cycle and finding an optimal policy choice c 2014 Danny Hermawan Adiwibowo ALL RIGHTS RESERVED