Sexual Selection And Speciation In The Red-Backed Fairy-Wren 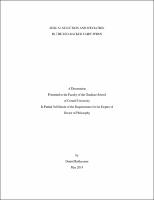 A longstanding question in evolutionary biology is whether divergence in sexual signals leads to speciation. A powerful approach is to examine closely related taxa that appear to be in the process of speciation, incorporating ecological, behavioral, morphological, and genetic data to understand how sexual selection affects the speciation process. The red-backed fairy-wren (Malurus melanocephalus) is a small passerine bird endemic to Australia that is classified as two subspecies based primarily on variation in two sexual traits: red vs. orange male nuptial plumage color and tail length. My dissertation focused on analyzing the pattern of genetic and morphological variation between the two subspecies and conducting field experiments to explore the selective forces and behavioral mechanisms responsible. Spatial modeling analyses revealed that the two subspecies exhibited variation in numerous non-sexual traits that was well explained by underlying environmental variation. In stark contrast, variation in plumage color could not be explained by environment alone, but rather exhibited a clear pattern of isolation by distance, suggesting it has diverged stochastically as a result of divergent Fisherian sexual selection. I then compared clinal variation in allele frequencies at many unlinked single nucleotide polymorphism (SNP) loci to variation in plumage color across a 3,052 km transect through the species range. Clines for many SNP loci were centered at the Carpentarian Barrier, confirming the existence of a hybrid zone at the location of secondary contact between the subspecies. The cline for plumage color was displaced 390 km east of the genetic clines, indicating that alleles for red plumage have introgressed asymmetrically across the hybrid zone, likely driven by sexual selection. A plumage manipulation experiment in an allopatric population of the orange subspecies confirmed this idea, as experimentally reddened males sired significantly more extra-pair young and had higher reproductive success than orange males. To determine whether this mating advantage was due to female preference or a competitive advantage of red over orange males, I presented territorial males in populations on both sides of the hybrid zone with various combinations of local, foreign, and heterospecific male mounts paired with local, foreign, and heterospecific songs. Territorial males consistently responded most aggressively to the local song regardless of mount plumage color, suggesting that plumage color is not a signal used in male competition. Thus, female preference for red, and not a competitive advantage to red males, likely drives the asymmetrical introgression of red plumage. In conclusion, although the red-backed fairy-wren appeared at first to be in the process of speciation by sexual selection owing to the conspicuous divergence in sexual signals between the subspecies, a thorough analysis of the system revealed a much more complicated situation. This study highlights the strength of fine-scale analyses using behavioral experiments to elucidate broader patterns of speciation. Divergence in sexual signals, as seen here, will not always lead to reproductive isolation and speciation, particularly if response to those signals has not diverged in tandem. In the red-backed fairy-wren, sexual selection instead appears to have eroded one potential speciation phenotype between subspecies. This phenomenon may be more common in species at an intermediate stage of divergence, particularly those subject to strong sexual selection that exhibit alternative mating tactics such as extra-pair mating.