Solids By Design: Exploring Variations In Surface Chemistry And Nanostructure Orientation In The Design Of Functional Nanocrystal Solids 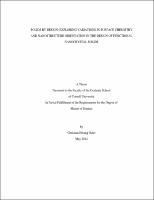 Engineering functional solids from nanocrystalline building blocks presents a novel approach to design new, solution processed functional materials and devices. When NCs organize into an assembly, the interactions between these materials can be modified depending on their surface chemistry and nanostructure orientation, two parameters that are explored in this dissertation. The overarching goal in studies that explore alternative surface chemistries for colloidal nanocrystals is to replace the long, insulating organic ligands that cover the particle surface during synthesis with short, preferably inorganic molecules that facilitate more efficient dot-to-dot interactions. The ligand chemistry I studied for the surface chemistry project uses chalcogenidometallate clusters (ChaMs), inorganic metal chalcogenide ions that can collapse to form a mesoporous semiconductor film around a nanocrystal array. Previous reports indicate that this material can coordinate with the surface of NCs like CdSe to form all-inorganic nanocomposites for electronic devices. Due to the labile surface chemistry of PbSe, this approach is unfeasible, requiring instead a solid exchange that allows the ChaMs to infiltrate and replace the organic ligands in deposited films of PbSe NCs. The success of our ligand exchange approach is attributed to the processing conditions that allow PbSe NCs to retain their nanocrystalline character even when exposed to the caustic ChaMs. After surface treatment and annealing, the inorganic nanocomposites exhibit function as electronic materials for NC-based transistor devices. Another consideration in the design of NC solids is the structural orientation that each building blocks assume within a film. The effects of structural orientation are especially evident in anisotropic materials like nanorods, where the geometry of the building block defines the direction in which optical and electronic properties are more pronounced. I monitored the self-assembly of CdSe/CdS NRs in a solvent vapor cell using GISAXS and GIWAXS to probe film structure and optical transmission to correlate material orientation with absorption. Ex-situ photoluminescence measurements were collected to support our in-situ measurements. We determined that absorption is most pronounced when the nanostructure long axis is perpendicular to the direction of light, a result which can be explained by ex-situ measurements and simulations.