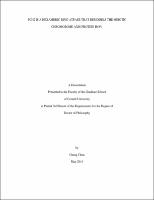 In most organisms, the accurate segregation of chromosomes during the first meiotic division requires at least one crossover between each pair of homologous chromosomes. Crossovers form in meiosis from programmed double-strand breaks (DSBs) that are preferentially repaired using the homologous chromosome as a template. The PCH2 gene of budding yeast is required to establish proper meiotic chromosome structure, and to regulate meiotic DSB repair outcomes. PCH2 was also found to promote meiotic checkpoint functions, and to maintain ribosomal DNA stability during meiosis. The major focus of my thesis research has been to elucidate the molecular mechanism of Pch2 function. Pch2 contains an AAA (ATPases Associated with diverse cellular Activities) domain and is conserved in worms, fruit flies, and mammals. I performed the first detailed biochemical analysis of Pch2, and found that purified Pch2 oligomerizes into single hexameric rings in the presence of nucleotide. In addition, I showed that Pch2 directly binds to Hop1, a critical component of the synaptonemal complex that facilitates DSB repair to form crossovers. Interestingly, Hop1 binding by Pch2 induces large conformational changes in Pch2 hexamers, suggesting that Pch2 hexamers exert mechanical forces on Hop1. Importantly, I demonstrate that Pch2 subunits coordinate their ATP hydrolysis activities to displace Hop1 from large DNA substrates, providing an explanation for the altered localization of Hop1 in pch2[DELTA] mutants that was previously observed. Based on these results and other genetic and cell biological evidences I propose that Pch2 impacts multiple meiotic chromosome functions by directly regulating Hop1 localization. The second part of my thesis involves analyzing the pro-crossover Msh4-Msh5 complex, which facilitates interhomolog crossover formation by stabilizing recombination intermediates. To analyze Msh4-Msh5 function, I assayed spore viability and crossover levels for 57 msh4 and msh5 mutants and identified threshold mutants that showed wild-type spore viability but significantly decreased crossover levels. These findings suggest that a buffering mechanism exists to ensure the obligate crossover when overall crossover levels are reduced.