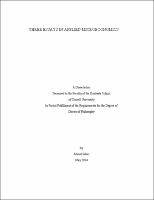 This dissertation consists of three independent chapters that aim to further our understanding of the role of information on decision-making. The first chapter examines the effect of the introduction of broadband Internet on political behavior in the United States. I find that broadband has led to a large increase in voter turnout in presidential elections, as well as an increase in the total amount donated to political campaigns. Consistent with the hypothesis that Democrats have a stronger online presence, I also find a large effect on Democratic vote share in presidential elections. Evidence suggests the existence of both direct and indirect channels for the broadband effect. In particular, I find that broadband availability is associated with greater political knowledge, an increase in online (but not offline) donations, and the promotion of liberal values. In the second chapter, I examine the implications of a cognitive deficiency called "hindsight bias" on two legal standards: negligence and probable cause. When the court applies the negligence standard, I find that hindsight bias discourages (encourages) preventive measures that reduce the likelihood (severity) of an accident (respectively). When the court applies the probable cause standard, I show that hindsight bias discourages aggressive searches that increase the likelihood of police seizures. I also study the effectiveness of counterfactual thinking as a remedy for hindsight bias, and find that it is only unambiguously effective under the probable cause standard. In the third chapter, co-authored with Rebekka Christopoulou and Dean R. Lillard, we study smoking behavior in a model of cultural transmission. We derive conditions for the emergence and persistence of the smoking habit, and establish novel implications for the relationship between parental and societal influences. We then test and confirm the validity of our theory using novel data from the United States.