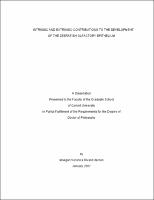 I have used the zebrafish, Danio rerio to study the following stages of olfactory sensory system development: the cell movements underlying olfactory placode (OP) formation, environmentally induced gene expression changes in the differentiating OP and modulation of gene expression changes in sensory neuron development. Cranial neural crest (CNC) and placodes both contribute to vertebrate sensory structures. Little is understood about the extent of cellular mixing between the CNC and OP fields during OP formation. I used live imaging and molecular markers in fixed tissue to follow the CNC and OP fields during OP formation. I found that while the CNC cells associate with and eventually surround the OP, little cell mixing occurs between the fields during this process. The OP develops into the olfactory epithelium (OE). I explored the effects of the nenvironment on gene expression in the developing OE. My lab previously showed that zebrafish form and retain olfactory memories of the odorant phenylethyl alcohol (PEA). I performed microarray analysis using the OEs of PEA imprinted fish to identify upregulated genes. One of the genes I identified was the transcription factor otx2. Otx2 is expressed in the developing and adult OE. The number of otx2 expressing cells is significantly increased in juvenile and adult OE of PEA exposed fish. I showed that otx2 cells also express neuronal markers suggesting that PEA exposure leads to an expansion of a neuronal precursor population that is maintained throughout life. The environmentally induced gene expression changes I observed could be a consequence of activating the immediate early genes (IEGs), which are transcription factors that are rapidly upregulated in response to sensory stimuli. To test if IEG expression was affected by odorant exposure my lab and I exposed juvenile zebrafish to a number of odorants and examined the expression of three IEGs in the developing OE. We found a significant change in the expression of the IEG, c-fos when fish were exposed to odorants of behavioral relevance. My studies provide a better understanding of how the OP forms and how the environment affects the differentiation of cells within the OE.