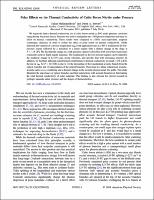 We report the lattice thermal conductivity (κ) of cubic boron nitride (c-BN) under pressure calculated using density functional theory. Pressure was used to manipulate the c-BN phonon dispersion and study its effect on thermal conductivity. These results were compared to c-BN’s mass-equivalent, nonpolar counterpart, diamond, in order to isolate the effect of polar bonds on thermal conductivity. Unlike diamond, the variation of κ at room temperature (κRT) with applied pressure in c-BN is nonlinear in the low pressure regime followed by a transition to a linear regime with a distinct change in the slope at P > 114 GPa. We find that the change in κ with pressure cannot be described with power law expressions commonly used for Earth mantle materials. The nonlinearity in the low-pressure regime can be related to the nonlinear change in LO-TO gap, group velocities, and specific heat with increasing pressure. In addition, we find that, although optical branch contributions to thermal conductivity are small (∼2% at RT), the rise in κRT for P > 114 GPa is due to (1) the decoupling of the longitudinal acoustic branch from the optical branches and (2) depopulation of the optical branches. These lead to a sharp reduction in acoustic-acoustic-optic (a-a-o) scattering and a discrete change in the acoustic phonon mean free paths. This study illustrates the importance of optical branches and their interactions with acoustic branches in determining the total thermal conductivity of polar materials. This finding is also relevant for current research in geologic minerals under pressure and the design of thermoelectrics.