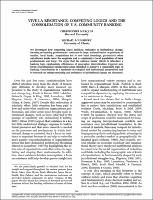 We investigate how competing logics facilitate resistance to institutional change, focusing on banking professionals’ resistance to large, national banks’ acquisitions of smaller, local banks. Acquisitions led to new bank foundings, particularly when out-of-town banks were the acquirers and a community’s local population of bank professionals was large. We argue that the national banks’ efforts to introduce a banking logic emphasizing efficiencies of geographic diversification triggered new forms of professional entrepreneurialism intended to preserve a community logic of banking. Contributions to a synthesis of ecological and institutional perspectives and to research on entrepreneurship and resistance to institutional change are discussed.