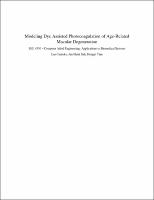 Age-related macular degeneration (AMD) is major cause of blindness in Americans aged 50 years and up. In 2010, there were more than 2 million cases of AMD in the United States and the National Eye Institute projects that there will be nearly 5.5 million cases per year by 2050. The more detrimental form of AMD, the “wet” form, is caused by the development of new blood vessels within the macular region of the eye, a condition known as choroidal neovascularization (CNV). Several treatment modalities are available for AMD, however the most common is laser photocoagulation in which the abnormal blood vessels are coagulated using a high intensity laser as a heating source. While this treatment modality is effective, high temperatures within the deep eye tissue can cause unwanted collateral damage. Optimizing this thermal treatment thus amounts to minimizing the duration of treatment such that the abnormal blood vessels are destroyed but damage to other tissues is minimized. One possible extension was also explored in this study which is the injection of highly absorbent dye into the abnormal feeder vessel to improve the laser absorbance. The model used in this study employs a 3D Cartesian geometry over which Pennes bioheat equation is solved for the temperature profile over a time scale of 1 second. The thermal damage is then analyzed by observing the temperature history in abnormal and healthy tissue with the goal of achieving a cumulative effective number of minutes at 43oC greater than 80 minutes within the target tissue, the feeder vessel, while minimizing the thermal damage elsewhere. Results from the model suggest that after 1 second of laser application, temperatures in the feeder vessel rapidly rise to a maximum of 67oC and temperatures in the retinal pigment epithelium (RPE) rise to 86oC. In the hottest section of the feeder vessel, that section which is directly exposed to the center of the laser spot, the desired thermal damage is achieved within 0.55 s. The model was assessed for sensitivity to thermal properties as well as the absorbance coefficient, μa, in the feeder vessel and RPE sections. Results from this analysis suggested a change in temperature of less than 0.5% when these parameters were varied within the reasonable limits found in the literature. This suggests good applicability of the results to individual patients. The use of dye to target and improve heat transfer is a novel improvement to the existing photocoagulation process. To assess the efficacy of such a modification, the absorbance coefficient was increased from 4610 m-1 to 9000 m-1 to simulate the effect of the dye. The results show very little variation in feeder vessel temperatures suggesting that dye assisted photocoagulation is not a large improvement from the current process. The effect of blood flow velocity was also assessed in this study. As expected, it was found that increasing blood flow velocity shifted the maximum temperature in the feeder vessel along the direction of flow and resulted in slightly lower maximum feeder vessel temperatures as the blood cools the feeder vessel by convection. The results of this study suggest that shorter treatment times may be useful in reducing collateral tissue damage, however a treatment time of 1 second is justified as a margin of safety to ensure complete destruction of the desired tissue.