Effects of Cell Phone Radiation on the Head 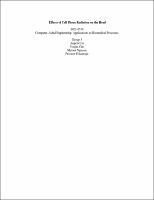 The brain is sensitive to small changes in temperature. Temperature increases may affect enzyme function, leading to possible negative biological effects. Living tissues are dielectric materials, which are subjected to dielectric heating by radiation. A common source of radiation is the cell phone. People often hold cell phones next to their ears, which may exacerbate the effects of radiation, and therein, temperature change. The rate at which tissue absorbs heat from radiation is called the specific absorption rate (SAR). Through observations of SAR values, the thermal effect of the electromagnetic wave heating of superficial tissue within the brain can be quantified. The goal of this project is to model heating of tissue layers in the brain due to cell phone radiation exposure in order to evaluate implications of cell phone usage on brain function. Cranial temperature profiles were studied with varying cell phone distances from the ear, usage durations, and radiation intensities. Cell phone radiation in a model head was simulated in COMSOL Multiphysics 4.3b using governing equations for electromagnetic waves and temperature. Maxwell’s equation for electromagnetic waves was used to determine the electric field and the SAR that would determine heat generation terms. The three-dimensional heat equation was then used to determine the increase in temperature within the brain after a specific period of time. Three dimensions were necessary since there is no symmetry within the head in the presence of a cell phone. To accurately simulate thermoregulatory processes in the head, metabolic heat generation from these tissues and convective blood flow were included in the heat equation. Values for thermal conductivity, skull dimensions, metabolic heat generation, emissivity, radiofrequency, and power dissipation rate were found in relevant literature. In addition, we compared increases in temperature in the brain model with values found in literature to give us an approximation. The results indicate that after two hours of cell phone usage, the maximum increase in brain temperature was slightly greater than 0.2°C in an adult. These results show that there is a minimal effect on cranial temperature by cell phone radiation, even after a significant amount of cell phone usage. The head’s thermoregulatory processes of insulating layers and convective blood flow seem to successfully maintain brain temperature within 0.2°C. Thus, brain function is not severely impacted by the thermal effect of cell phone radiation. However, this model may help develop more accurate guidelines for appropriate cell phone usage.