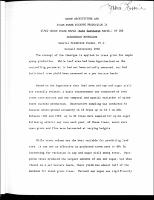 The concept of the ideotype is applied to trees grown for maple syrup production. While leaf area had been hypothesized as the controlling parameter it had not been actually measured, nor had individual tree yield been assessed on a per hectare basis. Based on the hypothesis that leaf area and sap and sugar yield are causally related, a basic reassessment was conducted of both crown architecture and the temporal and spatial variation of xylem-borne sucrose production. Destructive sampling was conducted to measure above-ground allometry in 18 trees up to 43.5 cm dbh. Between 1981 and 1989, up to 86 trees were sampled for xylem sugar following several sap runs each year; of these trees, seven were open-grown and five were harvested at varying heights. While crown volume was the best variable for predicting leaf area, it was not as effective as projected crown area or dbh in accounting for variation in sap and sugar yields among trees. Open-grown trees produced the largest amounts of sap and sugar, but when viewed on a per hectare basis, their yield was almost half of the maximum for stand-grown trees. Percent sap sugar was significantly higher with increasing tap height, and while sap volume flow was greatly reduced, it did occur throughout the sap season, and without vacuum extraction, from single taps 14 m aboveground. Within year, the maximum recorded percent sap sugar appeared to coincide with the date at which the regression of the mean daily temperature rises above 0 oC. Variation among years is clearly the largest source of variance in sap and sugar yield; however, previous defoliation studies indicate that xylem sugar and starch accumulation or photosynthetic capacity is not coupled. Research reported here supports this conclusion by showing a poor correlation of leaf area to percent sugar. Xylem embolization driven by leafless stem transpiration could be affecting sap yields and sugar concentration not only within the crown but also at breast height among different trees. Wintertime evaporative demand could, therefore, be more important than summertime photosynthesis in determining sap and sugar yield within and among seasons.