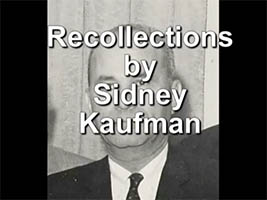 This video is also available at: http://www.eas.cornell.edu/people/honorary/kaufman.cfm