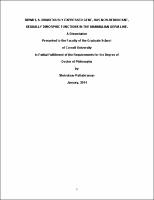 Normal spermiogenesis requires the transcription of many genes that occurs exclusively after meiosis. This wave of transcriptional changes in haploid spermatids is well-documented, but the underlying mechanisms of regulation are not. Deficiency of the dual bromodomain-containing protein BRWD1 has already been shown to be important for both male and female fertility. Here I show that nearly 300 transcripts, most of which are spermatid specific, were downregulated in Brwd1-/-mutant testes. There was nearly complete elimination of transcripts encoding proteins important for spermiogenesis, such as the protamines and transition proteins. However, the misregulation was not associated with global epigenetic changes in chromatin, suggesting that BRWD1 acts selectively upon certain haploid-expressed genes. Our collaborators showed that Brwd1 deficient oocytes, on the other hand, do not have any differences in transcript levels but display a two-fold increase in LINE1 expression. Despite BRWD1's expression in development, infertility is the only clear phenotype in Brwd1 mutants. I found that mice doubly mutant for Brwd1 and its paralog Phip were phenotypically indistinguishable from Phip-/- mice, indicating perhaps that another paralog, the X-linked Brwd3, may be functionally redundant to them in the soma.