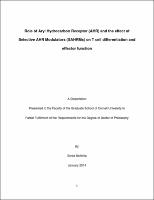 A number of autoimmune and chronic inflammatory diseases are related to environmental stress. Aryl hydrocarbon receptor (AHR) is regarded as an environmental sensor integrating immune responses with environmental stress and thereby influencing the extent of host immune response. The physiological role of AHR, particularly, in the immune response remains a key question after the discovery that AHR can modulate Th17/Treg axis in a ligand specific manner. However, discovery of a non-DRE mediated AHR activation in addition to its canonical DRE-mediated pathway further adds to this complexity thereby necessitating a more critical approach in delineating the role of AHR in the context of Th17/Treg balance. Selective AHR modulators (SAHRMs) are a recently identified class of compounds that are capable of binding to AHR and repress cytokine- driven gene expression without activating DRE-driven responses We have used three classes of AHR ligands namely agonist, antagonist and partial antagonist (SAHRM) to delineate the role of AHR in the context of Th17/Treg regulation both in vitro and in vivo. Here, we show that inhibition of the DRE-driven response is sufficient to suppress the Th17 differentiation. Also, we show that the suppression of Treg differentiation is dependent on the inhibition of the non-DRE mediated pathway. We have also delineated the role of DRE vs non-DRE driven responses of Th17 regulation in both an acute vs a chronic Th17 mediated diseases. In an acute inflammation using C. rodentium model of IBD (Inflammatory Bowel Disease) AHR agonist enhanced Th17 production and thereby promoted resolution of infection. On the other hand, using S. rectivirgula in a chronic mouse model of Hypersensitivity Pneumonitis we show that inhibition of DRE and /or non-DRE mediated response had minimal effect on IL-17A production but precludes Th17 plasticity by enabling secretion of alternate lineage antiinflammatory cytokines. This work has profound implication in pharmacological intervention in autoimmune and chronic inflammatory diseases by developing AHR compounds which can modulate DRE and non-DRE driven responses.