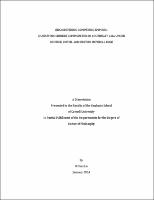 This dissertation examines the relationship between China's expansionism and overseas Chinese empowerment in the late nineteenth and early twentieth centuries. It looks at the connection between the Chinese state's ambition of extending its political sphere beyond its territorial boundaries and overseas Chinese increasing political, social, and economic rights. By focusing on the Chinese in the Dutch East this multi-sited research shows that the two seemingly different projects, namely the construction of a pan-Chinese nation and state beyond its territorial boundaries and the overseas Chinese empowerment in colonial Southeast Asia are mutually enforcing processes that developed in tandem. By approaching this topic from the perspectives of imperial competition and journeying overseas Chinese, I argue that China's construction of a pan-Chinese nation and state, and its competition with European empires and the emerging Japan for overseas Chinese support generated a new identification space for the Chinese in the Dutch East Indies. The competition between empires for overseas Chinese support created opportunities for the overseas Chinese to transform their status from stateless subjects to Chinese nationals, Japanese imperial subjects, and Dutch colonial subjects. My dissertation reveals that Dutch Indies Chinese, a politically unimportant overseas Chinese community that was not recognized by any empire as official subjects before the late nineteenth century, subsequently became pivotal for the promulgation of new state policies. They organized transnational movements in the cities along the Chinese and Southeast Asian coasts and enhanced their statuses by maneuvering China's policies and negotiating for political and socioeconomic privileges in the Dutch colony.