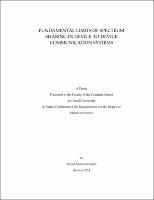 This work presents a new spectrum sharing mechanism for device-to-device communication systems. First, a K-user interference channel is considered and a sufficient condition under which using Gaussian codebooks at the sources and treating interference as noise at the destinations is information-theoretically optimal is derived. Afterwards, the notion of information-theoretic independent sets (in short, ITIS) is defined which denotes the subsets of users in a wireless network with n source-destination pairs inside each of which treating interference as noise is optimal. Then, the novel spectrum sharing mechanism of informationtheoretic link scheduling (in short, ITLinQ) is proposed which at each time schedules the users that form an ITIS. Furthermore, a distributed way of implementing ITLinQ is presented and it is shown, through numerical analysis, to outperform similar state-of-the-art spectrum sharing mechanisms such as FlashLinQ. Finally, the impact of network topology is studied in wireless networks where there is no channel state information at the transmitters using more sophisticated transmission schemes.