Beyond Neorealism: Cinema, Biopolitics, And Fascism 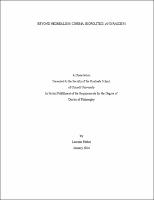 My dissertation "Beyond Neorealism. Cinema, Biopolitics, and Fascism," stems from a dissatisfaction with "neorealism" as the category that undergirds all approaches to Italian cinema. I argue that aligning Italian national cinema with neorealism introduces a prescriptive outlook on film history, and reduces all Italian films either to anticipations, prolongations, or betrayals of neorealism. The limits of this approach are particularly evident in the existing scholarship on cinema under Fascism. In the wake of Bazin's ethical opposition between "location" and "studio" films, cinematic realism during the regime has been retrospectively awarded a progressive thrust. I challenge this conclusion, and discuss Fascism's investment in realism for the creation of a shared national identity in 1930s Italy. I also show that a critical visualization of Fascism's identity politics is most often found in literary adaptations and genre films. My contribution to the study of Fascist culture starts from a cue by Philip Cannistraro: Italian liberalism and film industry underwent a simultaneous crisis in the 1910s. Accordingly, I analyze Pirandello's 1916 Quaderni di Serafino Gubbio operatore as an indictment of both Giolitti's Italy and its film culture. Underneath Pirandello's exposure of the distraction industry, I detect the roadmap for the transformation of cinema into a means of socio-political reclamation. From there I turn to how Fascism attempted to realize the cinema Pirandello envisioned by looking at Rutmann's 1933 Acciaio - based on Pirandello's Giuca, Pietro - and at other realist films by Camerini, Blasetti, De Robertis, and Rossellini. In the second part of my dissertation, I explore the endeavors made by the communist cell infiltrated within the Cinema journal (Visconti, Alicata, De Santis, Ingrao) to turn cinema intro an art of resistance. Ultimately, I organize my study of cinema in Italy along two conceptual registers: first, as an apparatus for regulating the life of the nation, and secondly as a means to negotiate alternative forms of national belonging.