Occult Feelings: Esotericism And Queer Relationality In Nineteenth-Century Us Literature 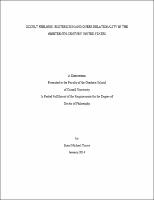 Occult Feelings: Esotericism and Queer Relationality in Nineteenth-Century US Literature uncovers the esoteric investments central to American Transcendentalism to analyze how authors used the occult to explore new, and often erotic, relational possibilities. I reveal the different ways that authors, such as Nathaniel Hawthorne, Margaret Fuller, and Amos Bronson Alcott, employed the occult to reimagine intimacy. To this end, my project studies literary representations of occult practices like alchemy and spirit contact, as well as the esoteric philosophies of writers like Emanuel Swedenborg and Jakob Böhme that fascinated authors in the nineteenth-century. Authors of American Transcendentalism-with their depictions of an esoteric correspondence between embodied and disembodied subjects, celestial bodies, plants, and inanimate objects- envisioned relationality as hidden, mystical, and non-dyadic. As such, the occult became a way to find more open and dynamic modes of relation beyond direct interpersonal contact. For example, reading alchemy in Hawthorne, I reveal how an obsessive interest in creating and then suspending homoerotic intimacies allows for queer modes of relation. In Fuller, I illustrate how her mystic intimacy with flowers highlights affective connections while insisting on an ever-present distance with objects. For Bronson Alcott, I demonstrate how his esoteric investments transform his relation to divinity. These authors, by refusing dyadic and concrete relations, offer what I call queer relationality: that is, a mode of relation that allows for queer forms of intimacy and affiliation while also queering relationality itself. I use the world queer both to highlight that writers often thought of relationality as erotic, while also underscoring that these reimagined forms of relation can invigorate debates in queer theory. At its most ambitious, my work speaks against a critical tradition that has tended to consider relationality as being wholly social or anti-social, melancholic or optimistic, normative or nonnormative, succeeding or failing. Occult Feelings augments the conceptual language scholars use to describe intimacy and desire both in the historical period of the nineteenth century and within current critical debates. While my project shares other scholars' fascination with the inchoate nature of desire and sexuality, ultimately, I attend to a wider range of possibilities for relationality that are not wholly circumscribed by categories of interpersonal intimacy or sexual desire.