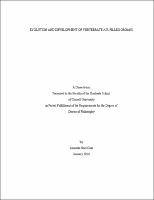 The presence of an air-filled organ, either lungs or a swimbladder, is a defining character of the Osteichthyes (bony vertebrates, including tetrapods). It has long been hypothesized that lungs and swimbladders are transformational homologs, with lungs being ancestral for the Osteichthyes. This homology is supported by many structural, functional and developmental similarities, as well as the developmental genetic data presented in this dissertation. Chapter one examines the swimbladder expression of a core set of developmental regulatory genes previously believed to only be coexpressed in the tetrapod lung, and compares the timing and location of expression in the tetrapod and fish model systems (mouse and zebrafish). While the order of expression initiation appears to be conserved across taxa, tetrapod Nkx2.1 is the earliest known marker of the lung primordium, where in zebrafish its homologs (Nkx2.1a and Nkx2.1b) are not expressed until two days after bud formation. Because the mouse Nkx2.1 null lacks tracheal septation and branching morphogenesis (like a swimbladder) I hypothesize that this delay in expression relative to morphological developmental time-points could be responsible for the transformation of an ancestral lung to a more swimbladder-like morphology. Though a lack of tracheal septation and branching morphogenesis are often cited as characters that differentiate lungs and swimbladders, these characteristics are subject to variation and convergence and the fundamental difference is the point of evagination from the posterior pharynx: lungs always evaginate ventrally and swimbladders always evaginate dorsally. This difference has been cited by many as evidence that lungs and swimbladders are not homologous, as there is no evidence for the traditionally cited mechanism of transformation, a gradual migration through laterally budding intermediates. Chapter two takes our knowledge of dorso-ventral patterning in the mouse lung bud and examines the expression of two critical patterning genes (Nkx2.1b and Sox2) in the developing swimbladder. I show that the expression pattern of the zebrafish homologs of these patterning genes are reversed, with Nkx2.1b expression restricted dorsally at the point of swimbladder evagination, and Sox2 expression restricted ventrally. This is only the second known case of dorso-ventral inversion of structure and underlying patterning gene expression.