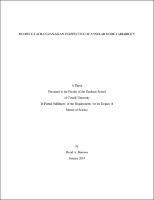 The leading mode of extratropical variability or annular mode is characterized as a meridional seesaw of mass between middle and high latitudes or equivalently, a barotropic dipole in the zonal wind anomaly field. With an understanding of the spatial structure of the annular mode variability, focus has shifted to the eddy-zonal flow interaction or Rossby wave breaking that leads to the persistence of the zonal wind anomalies. Much insight has been gained from the conventional relationship between the zonal-mean flow and eddy fluxes, and the resulting mechanisms often involve eddies of different frequencies or barotropic versus baroclinic processes. Here a new perspective of the annular mode variability is presented in the Modified Lagrangian-Mean (MLM) formalism of a quasi-geostrophic (QG) and absolute vorticity model. By applying the MLM to the QG potential vorticity (PV) tendency budget, a closure equation for annular mode variability or eddy vorticity flux can be obtained. The eddy vorticity flux closure model can be described by a simple diffusive equation with the eddy fluxes absorbed in the MLM. A similar diffusive equation is obtained using absolute vorticity but with a redefinition of the wave type and wave source. Instead of a QG PV, baroclinic wave source, absolute vorticity provides a horizontally, divergent source of waves which are important for wave propagation, wave breaking, and annular mode variability. These formalisms are applied to a baroclinic eddy lifecycle and annular mode variability in an idealized model. It is shown that the shift of a zonal jet during an eddy life cycle can be attributed to horizontal wave tendency, whereas its persistence is concurrent with small-scale dissipation associated with Rossby wave breaking. Furthermore, analysis of annular modes in the idealized model suggests that the wave activity associated with the annular mode variability is short-lived, and that the persistence of the annular mode may be attributed to the eddy source and diffusion of the eddy vorticity flux also associated with Rossby wave breaking.