A Language for Securely Referencing Persistent Information in a Federated System 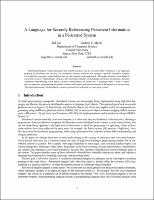