Magnetic Control of Micro-Magnetic Beads With Attached Enzymes And Catalyst 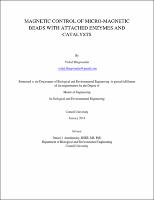