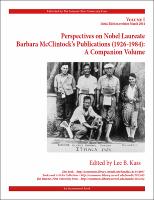 The original two volume set is a collection of papers and perspectives on the publications of Nobel Laureate Barbara McClintock, who was educated in Plant Breeding and Botany at Cornell University (1919-1927), and where she had been a faculty member (1927-1931), and research assistant (1934-1936). McClintock later reported that her significant early investigations were basic to an understanding of her discovery of "mobile genetic elements" (controlling elements, transposable elements, transposons) in maize, for which she received the Prize in 1983. McClintock’s research builds on work she began in the 1920s, and the only way to understand how she arrived at her conclusions is to start at the beginning. This "Companion Volume" includes reproductions of McClintock’s earliest publications and abstracts, including her investigations of fungi and Races of Maize in Latin America, with accompanying "perspectives" (summaries and analysis) preceding individual articles or sets of papers. It also provides perspectives on papers previously reprinted without reprinting them here.This book is an Incremental Book; that is, it will be released as additional "perspectives" become available. The goal is to have perspectives (summaries and analyses) for all of McClintock’s published papers eventually. The e-book format permits perspectives to be posted after they have been reviewed and revised as needed. Authors whose perspectives are currently in revision are listed as "forthcoming." If one of the publications currently has no accompanying perspective, it may be available online here at a later date.Volume III partly fulfills the Incremental Book’s goal by adding previously “forthcoming” perspectives, in addition to reprinting McClintock’s publications, listed in Volumes I & II via links that are no longer active. “Forthcoming” perspectives will be added as they become available. Volume IV (Increments) has been added.

NOTE: Volumes I & II were published as two high resolution files for printing. In order to have a single, full-text searchable composite of the two volumes and for the convenience of those using slower Internet service, a reduced resolution version has been provided (with “ONLINE” in its filename).