Ready Insights for the Future: Digital Dissemination of Agronomic and Environmental Knowledge Involved in the Agricultural Development of Central Brazil 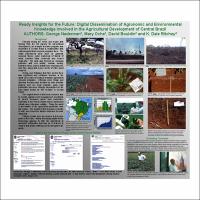 Long-term agricultural development of a major region usually involves supportive national policy, infrastructure development, financial investment and favorable market factors. The remarkable growth of food production in the Savannah region of central Brazil, however, also reflects significant contributions from new technology developed in the area. Some of the early research under-girding the development of this region, locally known as the "cerrado," was conducted at a Brazilian research facility, now known as the CPAC (Agricultural Research Center for the Cerrado). Collaborative work was done there by local researchers and several US institutions, with the sustained and effective support of US government programs aimed at improving long-term world food production. Information about this unusual success story can be found scattered among the libraries of various institutions and agencies in differing languages and countries. Original objectives, methodology, findings and some of the anecdotal experiences of individuals involved may reside in research theses as well as in scientific journals and extension bulletins. Because this story began some four decades ago, some of it is found as personal remembrances and collected wisdom within the minds, and perhaps in the file cabinets, of now-retired persons. Current digital technological developments appear to offer unprecedented opportunities to organize and store such information in readily and widely accessible forms. Described as "subject-based digital repositories," these offer a means of collecting material and offering it world wide in a cost-efficient manner. Searchers with diverse interests ranging, as examples, from soil, agronomic and environmental sciences to international economics, policy or history would all have access to knowledge that could contribute to new insights about designs for long-term experiments or strategies for resource development. Research findings and raw data from this specific agricultural ecosystem may apply to similar regions under differing political jurisdictions to meet new challenges as the future unfolds. Such areas and topics could be well served by this repository of knowledge. We describe such a repository, currently being developed by Mann Agricultural Library at Cornell University in Ithaca, New York. It would focus on programs conducted by the Brazil Cerrados Agricultural Research Center/Cornell University/North Carolina State University cooperative research project during the 1970?s and 1980?s. This was a multi-university collaboration with EMBRAPA, a Brazilian public enterprise. This mutually beneficial project involved several institutions and dozens of researchers, and it contributed significantly to development of the productivity and influence of today's agriculture in the Brazilian Cerrados. Materials offered in this ?Brazil Cerrados digital repository? would include non-copyrighted text, citations to published documents, personal reflections about key methods and experiences, context photography with explanatory captions and specially-authored analyses or interpretations. Depending upon interests, even interactive virtual discussions could occur. This digital material will exist as a collection within Cornell University's Open Access Archive (http://dspace.library.cornell.edu/), which is powered by DSpace. A DSpace "community" will be created for Cerrados with "collections" added for organizing the material. Basic indexing (or metadata) will be created for each item deposited. The material may then be accessed via a direct URL or by searching within DSpace or the Cerrados "community" by author, title, or keyword. Browsing by author, title, and date is also allowed. The materials added to DSpace are also searchable via popular search engines such as Google, which will permit the information to be easily located and used by people around the world.